The bell was hung in the bell tower of the village hall on Elizabeth Street, which had been built by the Sons of Temperance and was sold to the village in 1883. It was used to summon volunteer firemen. Later it was rung to mark times for the working day: at 7 am, noon, 1 pm and 6 pm. The bell was pealed more rapidly for fires. James Powell, the first bell ringer, was hired for $50 per year. Later on the job was added to the duties of the town hall custodian. One of the last bell ringers was Arthur Turcotte, who lived at Elizabeth and Martha Streets.

In the 1950s the hall was sold to the Boy Scouts and the bell removed from the tower and stored at the Boy Scout camp on Twiss Road north of Lowville. One night the bell was stolen, but the police were notified right away, and an officer on patrol (Tom Oliver) noticed a car heavily weighted down and forced it to stop. Afterwards the bell sat behind the Works Department building for years until the chairman of the library board, William Gilbert, began a fund raising effort to restore it and install it by the Library Building on Elizabeth Street. When the new Central Library was built in 1970, the bell was moved again to the north entrance.

Inscriptions
Engraved on the front side of the bell: 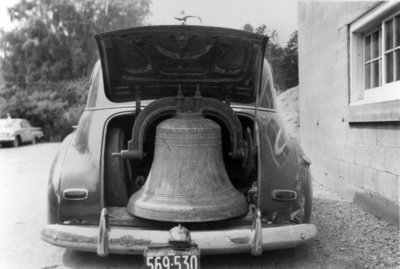