Creator
Norma Thornborrow, Photographer
Media Type
Image
Item Type
Photographs
Description
Exterior view with vine-covered verandah of the Aldershot Post Office on Waterdown Road; pump handle.
Notes
Keith Thornborrow, November 2005:
This farm, an 80-acre parcel of land including 3 fields and an excellent bush lot of maple, oak, beech, bass wood, white pine and pockets of hemlock, is thought to be the last of Alexander Brown's original 800 acres in East Flamborough.
The photo view is of the front porch (facing Waterdown Road) of the Jas. Roderick Hotel P.O. & Toll Gate, with the CNR tracks and well pump in the background.
The hotel had several outbuildings, including a drive shed with hitching rails inside along the wall and a large bank barn. The hotel, post office and toll gate were originally operated by the Browns and later by tenants, such as James Roderick.
Over the years the Browns rented buildings and fields to tenants. Robert L. Cutter Sr. in 1871 rented a log cabin a little further north of the Hotel on Waterdown road. F. A. Thornborrow, the last tenant, purchased the former hotel and buildings from Miss Mabel Thompson, a descendent of Alexander Brown, in 1951.
When a survey for a new proposed highway indicated that the Roderick Hotel, by now the Thornborrow residence, would be in the way, the drive shed & barn were dismantled and the house lifted from its foundations and moved to a new foundation out of the path of the proposed Highway.

The house was renovated and the new Aldershot Florist Shop was added.The green house had been erected a few years earlier. Less than 10 years later, the highway was re-designed and re-surveyed, and the house was now in the path of the proposed # 403. The Ontario Department of Highways bought the buildings and land from F. A. Thornborrow, who relocated to the south east side of Plains Road and constructed a mini plaza and apartment complex. The CNR purchased the original hotel location and all of the fields south of the #403 which now are partly the entrance road, GO Station and shunting yard.
Date of Original
1941
Subject(s)
Porches
Post offices
Geographic Coverage
Donor
Keith Thornborrow
Terms of Use
Right to use restricted. Please contact The Burlington Historical Society for further information.
Contact
Burlington Historical Society
Email
WWW address
http://www.burlingtonhistorical.ca
Agency street/mail address
1450 Headon Road
P.O. Box 93164
Burlington, ON L7M 4A3 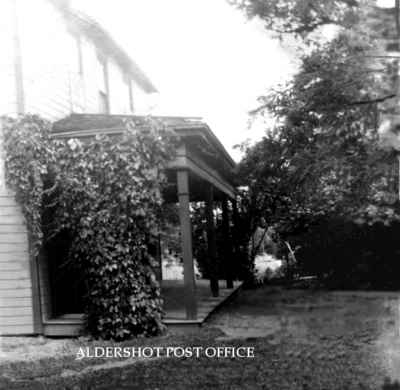